This morning, you looked over at me from bed. The first words out of your sweet little voice:

“Mama? You know growth spurts? Well, at your age, are they shrink spurts?”

“Christians believe Jesus Christ was the son of God.  They believe he was nailed to, and later died, on a cross. That’s Good Friday.”

I mean, you’re not wrong…

Growing up in the 80’s and 90’s, most everything had magic buttons that made things skip ahead really fast, or back up really fast. Walkmans, CD players, boom boxes, TV remotes, and as time marched on, TiVos, DVRs, etc. Many technologies use these ideas for skipping forward and backward.

I used it to do the math in the cult comedy, Clue, a movie I wore out from the gas station/pizza shop/ movie rental place/convenience store on the other side of town.

So color us surprised when you said, “Mom – if we could fast-forward in time 2 weeks, and then fast-backward in time back to right now…”

You are in second grade and I forgot to teach you the word, “Rewind.”

I blame Blockbuster. If Blockbuster hadn’t gone under, we’d still have casual reminders to “Please be kind, rewind” printed on every copy of Weekend at Bernie’s.

That said, fast-backward is right up there with “boo-boo hat,” a word I will never stop using, and I’m still convinced is related to how Germans created an entire language.

Today I saw this Iin Facebook memories and it brought me such joy. It was a good quote, and I thought to put it here, 4 years late.

growing up, Milestones, Parenting Decisions, Stuff you did

Over these last 7 years, you’ve had your share of tooth issues. From getting them to losing your first one in a traumatic fall, and a few months later from the same fall…

This photo was taken in October, 2017. It’s now 2020 and you still don’t have these front teeth. I’m actually hoping for a third school photo of the toothless wonder, but we’ll see.

Then, blessedly, two teeth came out naturally the way kids are supposed to lose teeth – by poking a loose one incessantly with a tongue (preferably your own) until it falls out, or a “friend” ties it to a remote control car and guns it. Normal kid stuff.

You have a few teeth left. Maybe you can do what this future rabble-rouser did for some of the more difficult molars:

But, I’m writing here to let you know about this one particular tooth – your fifth lost tooth if you’re keeping track. It fell out at school. You were PUMPED! We came home and you started to write a letter to the Tooth Fairy in preparation for getting your bountiful reward for selling body parts to a magic fairy.

Sidenote – while all this was happening, the magic fairy was biking home from work in the dark in the cold of winter and had to stop at the ATM, then buy groceries to make change for your tooth, because it’s 2020 and no one carries cash on them anymore, and you don’t have a Venmo account. We now have a dozen hot dog buns, but no hot dogs because we didn’t need THAT much change.

Anyway, you started to write a letter to the Tooth Fairy, stopped, looked up at me and started to cry. Not just a little cry. Inconsolable tears, snot pouring out of your nose, the whole shebang.

This complicated things, kiddo. I’m not going to lie. There is a script, one we had followed for the last two teeth (and your friend Ivy’s tooth when she lost hers at our house – which is a whole other thing because her tooth fairy has a contract to leave a lot more money per tooth than your tooth fairy does). You can see how we parents get in on this whole web of lies we weave and how when we’re in it and the script gets flipped, we’re left flapping in the wind.

I consulted with not one, but two online parenting groups AND my personal social media accounts because, seriously kiddo, WTF? We had a deal! Your da…tooth fairy was biking home in the cold. You leave the tooth, we stay up a little later watching Bruno or Expanse or Project Runway and when you are snoring loud enough the dog leaves your bedroom, your tooth fairy goes in, swears a bit under his or her breath, takes out the tooth, leaves you cold hard cash that goes in your piggy bank, and then swears a bit more in a loud whisper when hitting just *that* spot in your bedroom that makes the floor creak louder than a bulldozer on sheet rock. Then your parents go to bed.

My friends, however, looked at this objectively instead of from my perspective as your parent stuck in a web of lies. They said, “Let her keep the tooth.” Most even, it turns out, either leave money and the tooth for their kids to keep, or leave fairy dust (we’re not a fairy dust family – unless your tooth fairy wanted to leave some dog hair in the envelope). One said, “Throw the tooth a party,” which I rather liked but I wasn’t sending your dad out on a bike again to get a party hat for a milk-tooth. One also suggested we read Hogfather which we will together someday, but that book has some things to say about the Hogfather (Terry Pratchett’s amalgamation of Santa) that I’m not ready to give up yet. 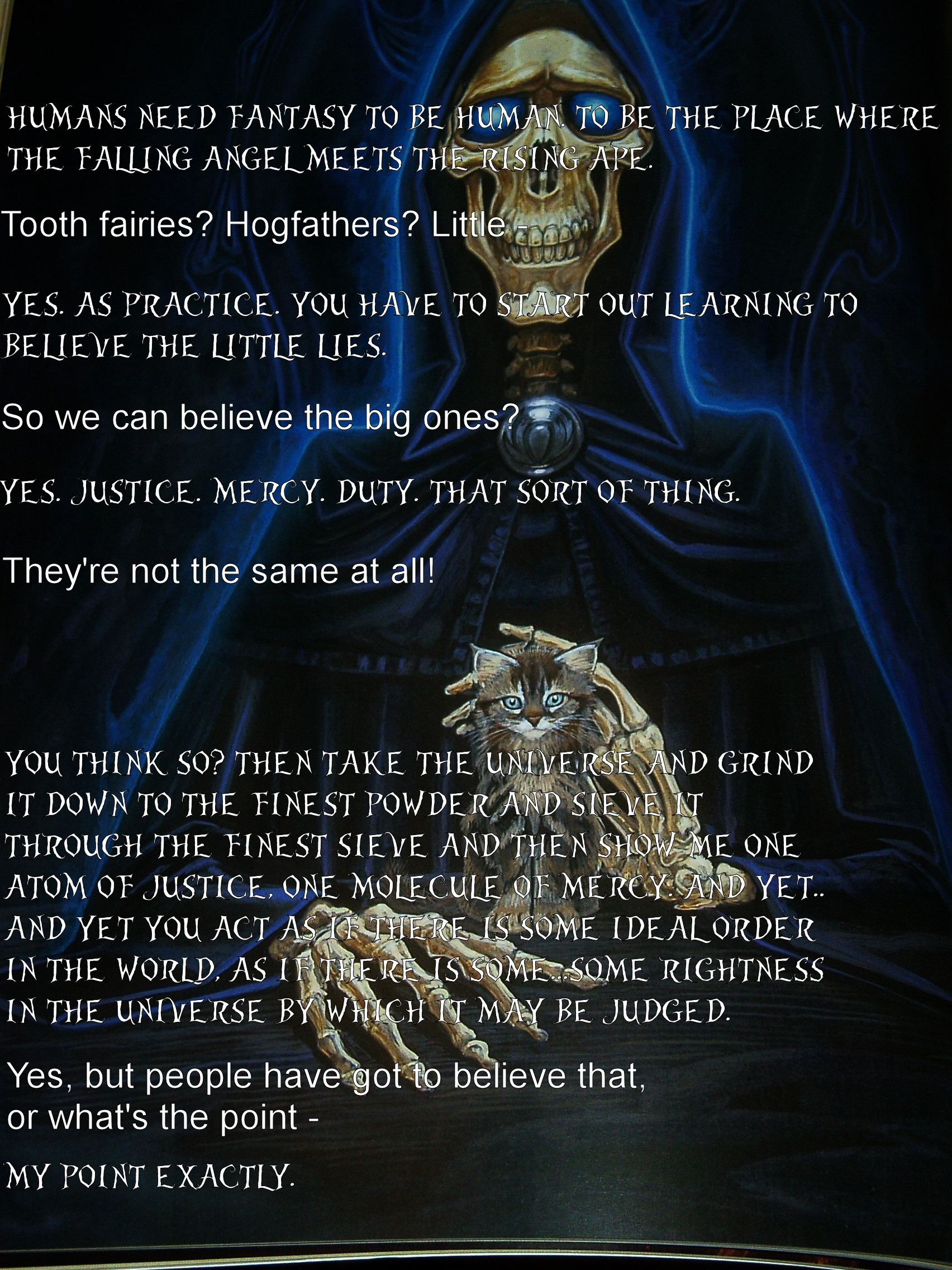 Conversation between Death (who speaks in SMALL CAPS throughout the Discworld series) and his granddaughter, Susan. Hogfather (Santa) is missing, so Death tries to be a good mythical being and help a brother out, as it were. The scene where Death plays a mall Santa is by far my favorite scene in all of literature, but this quote at the end of the book is one of my favorites, too. Particularly in this political climate. You can see why perhaps I didn’t read this book to you when you were a second-grader.

I got a lot of ideas and, most of all, reassurance that no matter what we did you wouldn’t turn out to be on Maury Povich’s show if you kept a tooth.

So, your tooth fairy had to write her A’s a bit different than normal, which was REALLY HARD TO DO, and left you a handwritten note in the envelope that did not contain your fifth tooth:

This was the solution.

And you know what? You’re fine. You were happy. And you went to school the next day upset your boots were not dried yet (sorry) and we were late to school, but these were all normal kid things, typical Thursday things.

So was your desire to keep your own body part in a special box in your bedroom, which I’m assured isn’t weird at all.

Look, I know it’s hard to get checked by a nurse. I get it. When your throat hurts, it hurts, and the last thing you want is a stranger swiping the back of your throat with a Qtip.

But, kiddo, you have to stop kicking nurses. In one day you are up to two strikes. One for each nurse you kicked or hit while they tried to swab your throat for strep. (One got really mad and left the room). One more and I’m pretty sure they can arrest you for assault.

I can’t do all the things I would do for a client if they are scared: Calming Cap (blinders), heavy sedation medication, and a cheese stick. However, we can talk about it, and I understand you are scared. I get it. We’ll figure it out.

Honestly, I think just having time and someone who doesn’t say, “You have to do it this way or else” would help.  And being either much younger than 7 where you are too small to truly fight back, or much older than 7 when you can understand why the swab is uncomfortable but necessary, will really help.

Without prompting you decided to do what you do best: Write a note.

I tried to make you feel better by relaying a story of my youth. When I was 14 my dad had to lay across my legs, so I wouldn’t move when the doctor had to put a Novocaine needle in the bottom of my foot through a wart. This was so he could then use nitrogen to freeze it off.

Turns out, military dad who was taught weapons at West Point didn’t lay down hard enough and the doctor ended up with a black eye from my other foot kicking him square in the eye socket.

I told you this story to demonstrate that I understood what it’s like, that it’s not fun, but we have to sometimes do uncomfortable things to be healthy.

However, what you took away is that mom is a badass and told your entire second-grade class today that Mommy Kicked a Doctor in the Face.

At least you don’t have strep. Just two strikes on your medical record and a budding career as a baby MMA fighter.

You were very upset last night and kept saying we needed to grab “Little Joe”.

“Kiddo? What is Little Joe?”

“Little Joe, the cookie you made! We can’t leave Little Joe!”

Luckily, your dad finally figured out what you were talking about.

We were at the annual hang-out-at Uncle-Matt’s-and-make-holiday- cookies-extravaganza last night. One of the elves lost a leg so I decorated it as Tiny Tim, complete with an antler from a reindeer cookie kit that was repurposed as a crutch.

Now I want nothing more than you to rewrite the traditional Scrooge Christmas story with obvious “we’re trying not to get sued” names like Little Joe, The Spirit Christmas Now Time, and others.

Social media is great for reminding us what happened in years gone by. Here is a flashback from four years ago:

Actual dinner conversation
Me: Aislyn, use your fork.
Ace: I want to use my hands.
Me: Stab your food and shove it in your mouth. Like a lady.

I’d say things have changed, but they really haven’t.

Last week, you had the chance to take a day off school to see a matinee of The Lion King with Auntie Maura and Aine.

Up until the night before, you thought you were going to a movie theater, not a Broadway production. That’s on me.

But, instead of taking the day off, you protested.