growing up, Kids and Pets, Milestones, out of the mouths of babes, Stuff you did, This Sucks

Dear Little,
Ok. Play along. What age would you have expected the first slam door/”I hate you” combo?
You were 5yrs, 11months, 6 days.
Circumstances: You wouldn’t get your shoes on to walk the dog who hasn’t peed in 7hrs. I enforced a time-out protocol and you absolutely lost your brain. Screaming, slamming the door, full-on highly caffeinated, I took your (fill in whatever cool substitute for a Game Boy is) teenager shit that I was 100% not prepared for.
After we walked the dog, who waited much longer to pee, you apologized to him for making him wait. It was really sweet.
So, just in case you were curious, there you go.
Love,
Mom

growing up, Stuff you did

You survived your first sleepover at Maddy’s house. Her parents also survived for those old enough to read and understand what having two 4-and 5-year-olds in a small apartment overnight could be like.

Your dad and I went to watch the Wait Wait Don’t Tell Me taping. It was nice to get away and know that you were in for a fun night.

After the show, I put my phone back on and saw I missed a ton of messages from Maddy’s mom.  I panicked. Are you not going to bed? Did you fall at the park? Are you in the ER? Did Maddy decide she didn’t want to share her parents overnight?

My panic turned instantly into laughter as I think this is my new favorite text, ever.

Yes, you are a good little reader.

It’s been over a year since the first time I wrote to you about the complicated feelings we adults have about lockdown drills. It’s something I literally can’t talk with you about yet because you think this is a game, as you should because you are 5.

This shouldn't be normal in America. My kindergarten student was confused when she saw this at full staff because half staff is so common. In other news she had a good lockdown drill today with the Somerville Police Department. I'm glad they are practicing reactive drills for when something happens here. If only we could do something proactive… It's been a year since her first lockdown drill. https://wp.me/p2JdX5-bG Nothing has changed. Except for the body count.

The flag is still at half-staff from the last school shooting. Maybe we should just keep it there because what’s the point to put it back up? There will likely be another three this week. There were two school shootings last week.

And yet, you keep marching into school, oblivious to the very real danger we parents and your teachers are preparing for with these drills. I’m not nieve to think that simple measures and common sense legislation, accountability and a change in how America views its addiction to weaponry will stop every single violent act with a gun.

But it will help.

I’ve been a mess all day long after seeing the police cars heading towards the schools knowing that this time it’s a drill, but what about next time?

I’m glad that there are reactive measures put in place for if this happens in your school, but unless proactive measures are taken, this will be a matter of when this happens to you or someone we know, not if. What are we supposed to do, Kiddo? Do we pull you out of school? Do we run for office? Do we just keep sending you places and hope for the best? I have literally no idea what I’m supposed to do as your parent here, and it’s all I can think of today.

I’m sick to my stomach.

When you read this as an adult, I can’t even imagine what you’ll say except that we adults put you guys in this situation. And, you’d be right.

Nothing has changed in the last year except for the body count.

School, Stuff you did

When I said, “Let’s roll,” I didn’t mean down the front steps in slow-mo.

You’re totally fine, by the way. That ridiculously huge backpack with the puffy unicorn on the back I tried to talk you out of back in September acted as a shock absorber.

growing up, Stuff you did, Stuff You Have

Yesterday was Easter, or as you called it, “Yay, it’s a dress-up day!”

As part of dressing up to go to Bella’s for dinner, you decided to go all out. You wanted high heels to go with your sparkly dress and butterfly leggings. You’re five, for the record. Heels and kindergarteners are not usually simpatico. That said, you were insistent. Instead of getting upset that you didn’t own a pair of high heels (again, you’re 5!), you decided to engineer your own.

After I got dressed, I found you in the kitchen with some purple kids glue, two Quatro Lego (the big, big bricks traditionally for wee-little kids to avoid a choking incident) and your old silver Ugg knockoffs. You were determined.

I did mention the kid’s glue wasn’t going to cut it, so I grabbed the super glue, but other than that, this was entirely your rodeo. You glued the pokey bit of the Lego up to the heel of the soft sole and did the same to the other boot.

After you assembled the Lego heels and I explained through tears that fingers and super glue don’t mix, you got dressed and we gave them a test walk.

They weren’t too bad. I mean, they looked really uncomfortable but it’s better you learn that about women’s fashion as soon as possible as that’s just simply the reality. You were pretty wobbly, but no worse than most of my friends walking in heels (and we’re in our late thirties). All in all, good job! I was really proud of your engineering and determination.

On our drive over to Bella’s something dawned on me. If Lego DID cooperate with a high heel maker, I’d wear those shoes. A simple black shoe with just Quatros stacked for the heel could really work. Want a lower heel that day? Take off a brick. Want to really go for it? Add 3 bricks. Not feeling red? Change the heel to blue bricks. Want to make a fashion statement? Multicolored bricks for just the heel. Customizable colors and heel height. I think, kiddo, you might be onto something.

School, Stuff you did

You were asked to draw what you predicted you’d look like in 100 years:

I, too, hope that at age 100 you are doing jazz hands with your cane.

Someday you’ll discover that the song “Get Lucky, ” a song you request so you can bop your head on your way to Kindergarten most days, isn’t about staying up late, eating lots of cotton candy and being lucky enough see a shooting star.

growing up, Stuff you did, well played

When you came out for the fourth time last night, well past your bedtime, after Dad and I threatened no shows the next night if you came out again, I knew you had a plan.

The first thing I saw after the living room door creaked open was this note, waiving like a surrender flag.

Before I could read it, I knew you wrote it on the dark by the light of your portable Pikachu light.

My heart got all warm. I wanted to be firm but I already knew I lost. My instinct (which I didn’t act on) was to ask for a high five because seriously, at 5 you know how to play the game and you won that round.

growing up, Stuff you did

Today was a snowy, 1/2 day of school for you. We took the opportunity to go to the Mirror Maze exhibit at the Museum of Science.

Little Zoe thought she saw you and ran face first into one of the mirrors at top speed. Aside from baby’s first concussion, we had a great time! 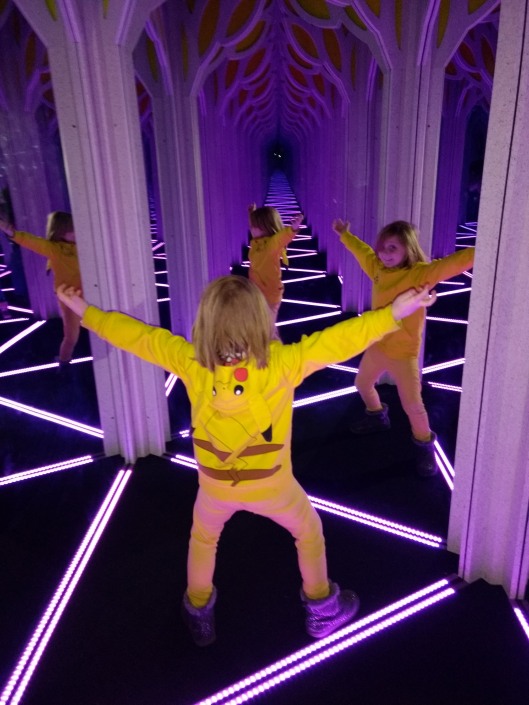 A Pikachu in a woodsy scene in a purple haze and no way out? Pretty much the 60’s in nutshell.

My favorite part was the guy walking around with the Windex. His job was to wander the maze (or maybe he’s lost?) and clean all the fingerprints off the mirrors. He either drew the short straw or is taking advantage of some quiet time from the hustle and bustle of the museum. Turns out the only safe way to go through is with an outstretched hand. What’s real, what’s not real, it’s all really surreal. Fingers hit glass? Ok, that’s a dead end. But the prints from earlier passerby were a dead giveaway if what we were looking at was a wall or an opening. No prints? Walk through.

I’m squatting down in front of you, but this photo makes it look like I’m down a hallway, really far away.

I bet they’d have a lot more fun, or concussions, in Denver or Washington State. I hope Windex guy gets out ok.

It’s a good thing we didn’t tell the minute clinic about your 2 pack a day habit during your flu shot. 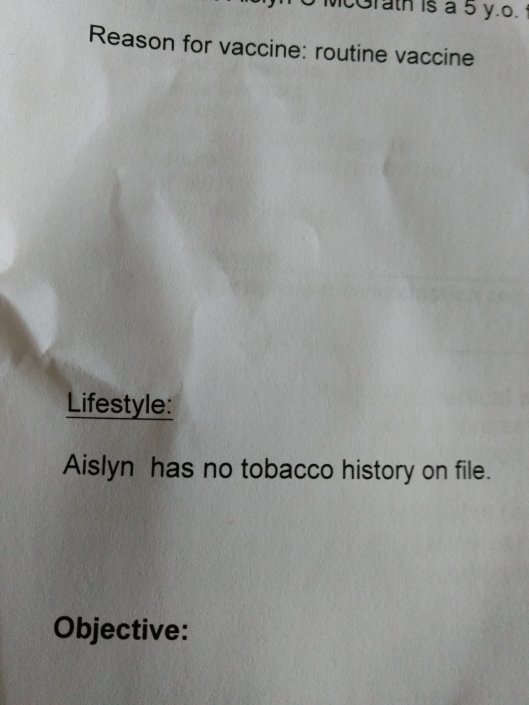